Sam Lowes climbs the Moto2 podium for the second time in 2020 after fighting back to third place from seventh on the grid while Augusto Fernández has a difficult afternoon at the Misano World Circuit Marco Simoncelli.

The weather turned just before the start of the Moto2 race at 12:20. For the first time all weekend rain started falling around the 4.2km Misano World Circuit Marco Simoncelli. On lap four riders were notified of the rain and the red flags were shown two laps later.

The grid for the restart was determined by riders’ positions on lap six of the original race, meaning Team Estrella Galicia 0,0 Marc VDS riders Sam Lowes and Augusto Fernández therefore started from 7th and 13th respectively.

In a shortened ten-lap restart, Lowes fought through the field to score a brilliant third place as Fernández struggled to find a good feeling on his way to 18th place.

It was an all-action start for the Briton, who had to recover from early battles with Jake Dixon and then Luca Marini to rise from ninth to fifth by the half-way point in the race.

The former World Supersport World Champion then started to run a brilliant rhythm, setting the fastest lap the sixth and seventh time around. His 1:36.195 on lap seven was the fastest lap of the race.

Soon he was closing on Marco Bezzecchi in the fight for second, but Sam ran out of time to challenge the Italian. He crossed the finish line in third, just 1.1 seconds behind first place, for his second podium finish of the season.

Lowes climbs two places in the World Championship to sit fourth with 83 points. He is now 42 points behind title leader Marini. 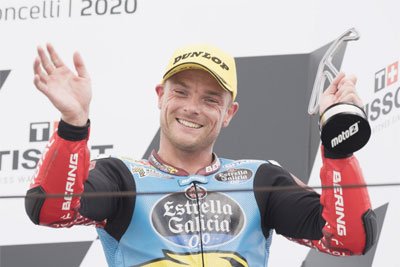 “It was a strange race. I was in a good position when the red flag came out. I made a bad start but I was feeling good and found myself in a good place on the track. The red flag was a bit unfortunate but I think it was the same for everybody. Then the restart was nice. I had a bad first few laps but then I made some good overtakes, I showed good pace and we managed to get on the podium. I’m really happy. The team deserve this after two good weekends. Obviously last weekend we started from pit lane so the team deserve this podium. Next weekend we’ll be in Barcelona at a track that I love. We’ll go there and try to be even better. Thanks to the team and sponsors!”